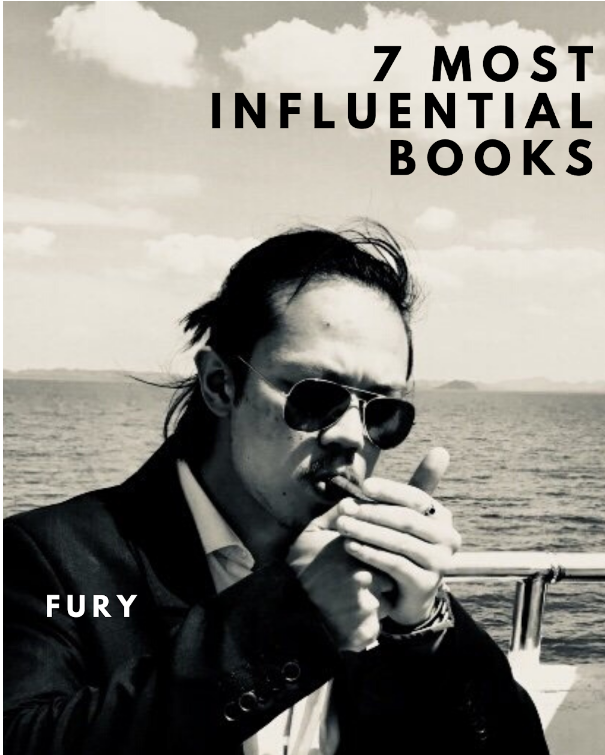 The following serves as another definitive answer to another Fury FAQ:

“What books do you recommend?”

This is too broad a question, and looking closer, a tad shallow. A person has very different interests, and there’s no way ours align, perfectly.

“What are the best books?”

“What are your favorite books?”
“What are the most influential books in your life?”

I have read almost 1000s of books in my life. Most I have forgotten. But some I revisit. You can see them as guides – on mindset/lifestyle/philosophy. And you can see they left a mark on me, permanent perhaps, and seep through in everything I do, and write these days. From my actions, to my thoughts. My thought patterns, my gut instincts. My writing style, the way I dress perhaps too, down the line.

The following are not the best books, they’re quite popular, really, and lot of people read them, but the way they influenced me is what makes it unique.

This guide will serve to make your own list of favorite books, and carve out your identity.

I cannot compile a book list, of any kind, without mentioning Child. It was 2013, and I had been reading for at least 5+ years, but not so much in the thriller, detective, crime fiction department.

I used to watch a lot of movies. A lot. I filtered the amount, by watching trailers first. The trailers led me to watching the movies I liked. Simple.

There was the Jack Reacher Trailer – Action movie by Christopher McQuarrie, with the lead title played by Tom Cruise.

There was something very unique about the Jack Reacher Character. Something that resonated deeply with me. A lone drifter, cool and chill, hard and menacing. I was an adolescent, and still quite malleable.

I hit the bookstore some time later, and there I saw 61 Hours, the latest installment of the Jack Reacher Thriller series. I read the blurb, and bought the book.

Upon reading the first sentence of it, I was hooked. I read all the 20+ books in the series, and internalized a lot of character traits signature to Reacher.

I drift and travel a lot. Trouble follows me. I don’t like possessions. Et cetera.

I mention this book for two main reasons.

1. The writing style of the author influence mine HEAVILY, if not Completely

2. The character of the books influenced me, deeply

A lot of people ask me about my writing style. Where does it come from, why do I do this or that? (Full Guide coming). Well, here’s the answer. I write in a hard boiled style, championed by Hemingway in the Modernist times, and adopted by many crime and thriller writers such as Child.

Child, however, puts a lyrical spin on his crisp prose. Something which is to be found in all of mine.

I wrote a 40+ page document, an essay almost, with notes about all the wisdom of Child. Lessons on: plot, character, dialogue, pacing, style, evolutionary psychology, hero’s journey, everything.

All the lessons I learned from him, and other writers, I distilled and crafted the storytelling masterclass, which is 300 pages long with decades of writing knowledge inside. Check out SAGA here.

I finished the last 800+ pages of Musashi in a 10h spurt. I started in the afternoon, continuing on in the evening, past midnight, and all the way to next midday. No sleep. Some small breaks here and there. To be honest, it only took me so long because I took notes.

The reason why I had to finish it, because I had imposed a deadline on myself. The Jocko Podcast #100. He and Tim Ferriss were going to discuss the book. I couldn’t miss out.

I had made a plan, chunking the book up in consumable amounts to read. A bit here, a bit there. But my road trip to Budapest, Hungary came up. I took the book with me, even, but of course I procrastinated. That city is too much fun.

That said, I don’t go back on my word, to myself, easily.

When I got back, I just finished the book in one sitting.

I did not mention this exquisite book for its epic plot, following Shimmen Takezo’s transformation to the legendary swordsman Miyamoto Musashi. Nor its strong side-plots, with well fleshed out side characters. Nor for its many wisdoms, or epic battles.

I mentioned this book for the feat I just described above. Books can teach you a lot. And this was a personal best for me. One of persistence, and focus.

If you want to learn more about which books about Musashi and the ones he wrote, and more on the swordsman himself, I for that, compiled a seperate blogpost.

Another must on this book list is an entry by the swordsman Musashi himself. It was either the Book of Five Rings, his main work, or his swan song, his masterpiece perhaps.

He wrote this treaty at 60+ years old, at the end of his duelling and soldier career. Scars absorbed, lessons learned.

It is the guide to walk alone through life. And leaves us with 21 principles to live. They are very simple, but I can guarantee you there’s no one alive who adheres to them all. It’s not easy, that’s why.

For those that know I had put it out as a free guide before, simply because a lot of people are not familiar with bushido classics. I see people being amazed by book recommendations I had been reading three years ago. I thought to myself, Dokkodo is freely accessible on the internet, let me channel it as a guide for those who need it.

I, personally, see the Dokkodo as a fail safe, or a backup. I return to it quite often. Especially in times of duress. That’s the theme in all these books I mention. Book I can fall back on, like a brother in arms.

The book is a primer to Zen and Bushido. Easy to absorb, fast to read, but impossible to master.

That’s what life is all about. Striving for Self-Mastery. (<= read the dokkodo compliled here)

This list wouldn’t be complete with an Ancient Stoic classic. Meditations, by the great Roman emperor.

I found out about Stoicism through Tim Ferriss and Ryan Holiday.

So, I learned about Ryan Holiday, then I read his Obstacle is the Way. A very beautiful book, full of stories, highlighting Stoic concepts.

After that, it was time to dig deeper, into the original works of Stoics. To be honest I haven’t read Epictetus Discourses, but I have read Seneca’s Letters.

But the thing what stuck with me about Aurelius Meditations is that it was his personal journal. That we’re reading. Thousands of years later.

Here there was a man maintaining his sanity, with journaling, with his own words, through death and betrayal and ruling an EMPIRE.

These EXACT words were what held an empire in place, under control, thriving. That’s what’s cool about it. Words influence emotions and thoughts. Thoughts control your actions.

And in this control, this is where Empires are forged.

Of all the bushido classics perhaps this one resonates with me the most. Yamamoto was a samurai who had never seen battle. This is apparent from the introduction, and the contents of the book.

I have been in fights. Not that many. But I haven’t served in Iraq, or Afghanistan, or never swung a blade, or killed a mortal enemy. In short, I’ve never done battle.

On Twitter, the social media platform, where I mostly reside, there is this thing called LARP-ing. Or role playing. Play-pretend. Being tougher online than you really are. Faking whole lifestyles for clout and engagement, or money. Et cetera.

So there’s a fine line talking about philosophy, lifestyle, and mindset, and zen, and bushido, and being phony. Now this is a personal issue I have had my whole life – what is phony? – who decides what real is? – why does that person get to be fake, and win, and why is that person ‘real’, but losing. These are very deep concepts I’ve thought about a lot.

In the end, not going to deep, for now, I love to see myself as genuine. And it resonates with most my brothers, and followers. They give me praise, I’m authentic, keeping it real, raw, real, speak from the heart, with unique voice, et cetera.

Like Yamamoto, I might never swing a sword. But my word is my sword, and for some it cuts deep. Deep enough. And perhaps that is why I am samurai enough.

No list of mine is complete without mentioning Jocko. 2015 I was introduced to this Force of Nature, and his mark on me was permanent. I later found out about other SEALs, like David Goggins, but Jocko, and his main philosophies in life are what stuck with me.

Now a lot of people say his ways of life are akin to Bushido or Stoicism, even though Jocko admits never reading much about those philosophies. There are eternal truths. And where there is truth, there are champions of it. Jocko is such a guy.

I could’ve mentioned Extreme Ownership, his first book, a high quality piece on leadership and business. But his second book, the field manual, did more for me.

There was a time, in 2018 I think, I needed that extra kick. That dose of motivation. That’s why this book is perfect. It has all kinds of cool excerpts of his podcasts, which I listened to often.

I had even begun transcribing the podcast myself, before the field manual came out, but that was no longer necessary. This book offered the finest of Jocko’s motivational speeches.

Watch me review Jocko’s forray into FICTION, where me and Eddy Waronweakness Quan Break down Final Spin in the HOOA podcast.

Not all of us are in the position, or have the means to have the perfect mentors. But there’s an old adage, a hack, a perfect trick really and that is books.

We get to choose our own mentors, these days. Just think of a field you want to get better at. Look up the most successful people in said field, and read up about them. That’s it.

You got yourself some fine mentors.

Now this is exactly the niche, or market Tim Ferriss plays on. It’s genius really. The man can interview really well – and even has cool interview techniques lined up in the book – and knows a bunch of successful people. Really successful. So he just lined them up and started asking them all the same questions.

What should a kid from college do? Do I go to college? Should I pursue my passion?

ALL the question one wants to ask. It’s there. With answers.

This book has taught me a lot. And I might revisit it, when I’m not taking action, because it probably has all the answers one need.

I don’t seek to be in a position to be a know-it-all. That said, I however see people in need of guidance. Literally asking for help, in real life, which are lot of my brothers, young men, or just in my DMs, also a lot of young men.

For guidance, I provide guides. With guidelines. These serve as a mini-boost, a kickstarter, which will hopefully propel you into an upward motion.

Gaining yourself some fine ass momentum, which you eventually must learn to maintain yourself.

A lot of people don’t know where to start.

And these books serve as an entry point, where I started.

Military warrior mindset, bushido, stoicism, the vagabond lifestyle, thriller writing, the entrepreneur lifestyle. All of it served a purpose in my life, and I extracted the necessary lessons.

Now I pass some of them on to you.

So that you will pass on your lesson.

War on Weakness — a Fury Discourse

The Stories of The Eyes