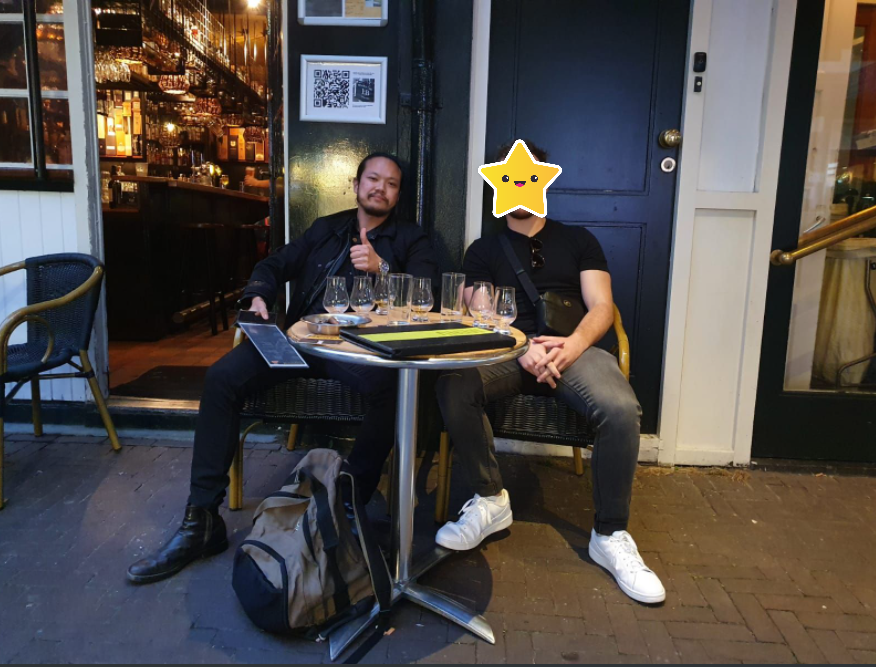 I was waiting for Shaw at the Amsterdam cigar lounge and I was a bit early and he was about to be here, just touched down, straight to his BnB, then straight here.

I saw him from across the street, he was wearing a black tee, shorts and shades. He looked extremely familiar, even though I’d never seen him in real life. We’d been twitter mutuals for over a year, and if you know money twitter or just twitter in general. You’re inside each other’s skulls for 24/7, so it feels like you’re pals since WWII.

He came close we linked up instantly and he was upbeat and we bantered a bit, rapport, then we went in.

I said something along the lines, Biggest cigar lounge, you seen right. He disagree, but after he saw the humidors Upstairs, he agree that was the biggest he ever saw.

I got Shaw into cigars, like many before him, and prolly many after him. But it was his enthusiasm, curiosity that kept the cigar connection between us warm, and he, and another twitter bro, is the reason why I got more serious into cigars as well, started an exclusive cigar group, with lovers from all over the world.

Upstairs, we chatted a bit with the shop keep and grabbed a couple stogs because Shaw was stocking up, for future travels, and because we’re he is from the selection isn’t as wide but also the stogs are more expensive there.

So I gave him some recommendations and we conversed with the storekeep a bit. This guy knew his stuff, some know jackshit, and you can just blow em straight outta the water.

Downstairs we both grabbed a coffee and sparkling water and smoked Nicaraguan cigars. Joya de Nicaragua Classico, Shaw the robusto size, the classic size really, I had the Churchill, long and full of power.

We chatted about crypto, girls, the good and the bad haha, and with each puff we got closer to the moment, and eachother, for what it was worth, at the moment, and you just become extremely lucid man. A good stog is one where after you’re done and you stand up you’re a bit rocked off your feet.

These stogs were definitely that. We conversed a bit about our plans for the night and Shaw kept hammering me on and on, about Action Bronsons. He showed me some clips, on YT and what the jazz was all about.

The fun was were we’d just go to mini places, have bites and snacks and drinks and smokes. I ended up smoking like a chimney of course, Shaw didnt ..

So we finished up the stogs in the lounge and I said to Shaw, Lets go to my favorite Whiskey bar, which I had brought couple dates to. It was pretty good, cozy, no one to bother you. But more important. A fuckton of whiskey to choose from.

But before we got there, Shaw wanted to grab a bite, and I said I knew just the place. The spot was just on the way and it was a Guinness bar .. had to give Guinness to Shaw, ofcourse

And as soon as we got a table, overlooking the water, I lit up a myfather garcia cigar, a Nicaraguan. Mellow, but balanced, but moreso once I get going, I get going. Shaw took it easy and waited for The Guiness and ordered fish and chips for the both of us. Guy got moves, too, and started vibing with the waitress, and she was from Ireland haha. He spotted the accent, playaaa

Oh well, little does he know Im training every damn day till we meet again ..

We pounced on the food, and laid a nice bottom, to soak up all the liquor to be had.

After we left for the whiskey bar, there we got some flights, and took a couple pics. The cute turkish chick to our right did us a favor. Shaw took the order of Irish whisky flights, sooo typical, and I took according to him * You take the fancy one bro * Scottish Lowland flight menu. Well it was super good. More a smokey Islay fan myself but the lowland provided new little nuanced angles.

We got nicely liquored up and That’s partly where the Action Bronsons started. For an outside haha truth be told you’d just see Shaw talking to his camera on his phone like a mad man, but we knew it was ACTION BRONSON dammit, lol

No knock, truth be told, it was super fun to watch it back, the day after

After whiskies, we powered on to the Main Square, I ofc started telling Shaw about the time I got stabbed, and the time I saw a kid get stabbed in the neck in front of the Starbucks on the main square. He just said holy shit.

We had another action bronson, on a little side street, it was dark and right by the canal and if it was dead quiet, I’m pretty sure you could hear the slight little trickling sound of water, but the city was still alive and kicking and this nice little wine bar boomed with life and light. We sat down. And Shaw ordered humus, we got some nice bread along with it. Well, nice, shit was fucking hard like stone, but the humus was plenty and the sauce was good.

They gave us some pickled stuff as well, which I attacked because that shit is good for anti hangover, that thing I dont do, no one really does it, tbh .. So I was complaining about the bread, and the cute waitress with a ribbon in her hair heard it and brought pita, and she smiled and bantered with us as Shaw whipped out his phone and started Action Bronsoning and I included the waitress.

I lit up another small little stick. We had some red wines and Shaw was making his chicks jealous.

After, we went to the main square and had some Belgium beef, Leffe and something else I forgot, but here Shaw wanted to show his forte in drinking and he said, Bro you gotta get apple juice and rum. I said, Apple juice. And rum. Why?

They only had captain frikking morgan. Thing kids drink to get fucking wasted. I’d know because I was with techno druggies who used to do that. Oh wellllll

So he ordered it and we got apple juice. To be honest it was decent enough. I’ll just order a Shaw next time as well.

Then I whipped out another fat cigar. And then behind us a wild older gentleman appeared. And whipping out his zippo lighter. Clicking it open.

He said, “A cigar you HAVE to light with a zippo.”

You dont have to do jack shit. But I was feeling good and Shaw too, and we were riding high, so I just let it go and smiled and let the guy light my cigar, as we sat at a table that was centered, so lot of people were looking, Shaw looked at me, I looked at him as my cigar lit up and the small trail of smoke disappeared into the night, and with a combustion along as well and the cigar was goooood.

I smoked a bit, and we drank, it was here Shaw smoked, or a bit later, but I wasnt letting up for damn sure.

We really got in the groove and Shaw said we gotta hit a spot before it gets popping.

I said I knew just the place (I dont think I told him this, but it was the place were I went clubbing with the crazy Mexican chick who stabbed me in the arm LOL).

So we walked and walked, in the night, it was not cold really, it was the perfect evening, and small little cobble stones alleys and streets were alive, and alit, and people were snaking there way to the red light district.

We were headed there, too.

Shaw said, How do you get your privacy here?

I said, You dont.

We passed the heaux, and then in a side street, there was a bar, and we had some beers there. Cash only, I got that one, and we nourished that beer, and it was almost game time.

So we got to the spot and I ordered Shaw a shot, one for myself too. He took it like a champ, kinda, because he made a face, haha, and he said something along the lines, gonna hate you for this.

Well then we crossed the street, and the place was packing, but only couple of chicks, for the rest a real sausage fest we call it, but there was this creepy fat bald guy who kept buying me shots, he liked my vibe, or he was g*y. But I got him to get one for Shaw too. And we had more where that was coming from, and then some more Action Bronson, and then everything went super fast.

Outside I was talking to some Czech chick who looked at me, and was into me, 10000%, then Shaw showed his moves to the other one, but then there was a switch and then everything was closing, people were moving, and then it was last man standing game. We chatted up some chicks, but that was the end of it.

It was late and dark and Shaw ubered us back to his BnB, and he was tired from his flight and he went to bed, as he let me crash on his sofa, which was pretty comfy, and I said dw, he even gave me blankets, and I said dw, I’ve slept on the streeeetz.

The next morning the booze awoke me, per usual, ridic early, so I meditated for 2 hours, and journaled some insights from the session, as Shaw arose and greet me a top of the morning and he got dressed and showered and we went to get some coffee near the main square.

I smoked again, and Shaw gave me some cool bizz tips and there we sat our goodbye, as he met up with some chick to smash and I had to get back to the grind.

If you liked this story, and you want to hear more about me and brother Shaw’s Action Bronson, then do support us .. so we can legit plan more Fury Shaw sessions, no seriously .. with the following business course

To be honest you’re supporting yourself, I’ve seen the course, and used it myself, it’s dope as hell for budding entrepreneurs!