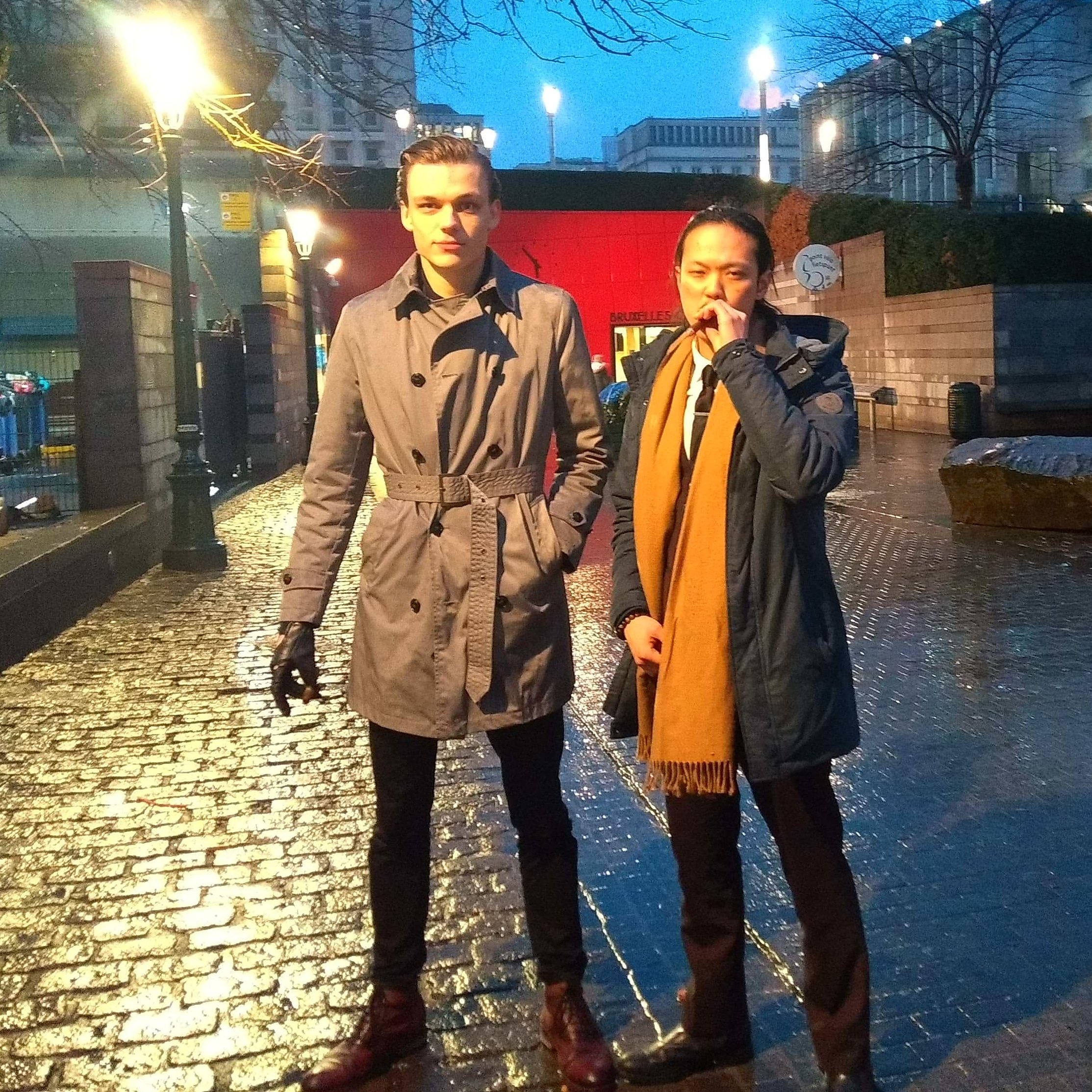 The first time I met Avtoritet I thought he was a scammer. He approached me on FB, and thus doxxing me, in a sense. Not that I care, but I’m quote unquote anon, for some reason. Not gonna lie, don’t really care.

Still, I’m always on my guard, been fucked too many times, by too many people, yada yada. Scammer alert.

But when you talk with AV, that’s what all his frens call him, there’s this weird openness to him, strange. Not argumentative, tho he is a hot head. Our Albanian friend would ascribe that to this blood. Yeah, Russian. But in the discourse, at first contact, I didn’t smell scammer, and he said he knew another friend we knew from Twitter, and we just talked about Twitter stuff.

This is how Fury met AV, or the other way around, and last month, June 2020, I attended one of AV’s biggest events in his life.

People ask us, How did you guys meet?

After a few months of talking, let’s say with a girl, you wanna fuck. Dates, meets, fucks. Now this is a weird analogy.

But if you know Twitter meets, if you know you know. There’s this compulsion, that you have to meet. You have to. Not gonna lie, reading a person’s TW feed, all frikkin day, makes you get to know the person.

There’s a chance a random stranger from Nigeria knows you better than your wife. Somehow.

So early 2019, end of jan, begin February, we set out to meet. In Belgium. I like to travel, and it was close by, and I’d just take the damn train. One to two hours away from the Netherlands, born and bred.

In typical Fury fashion, I had gone out in The Hague, with work colleagues, got fuck drunk, did some shots, got a number of an Italian, who flaked later, and like I said, Got shitfaced drunk.

But I had a train to catch, which I did, I went into that classic gueranimal survival Goggins mode, got the bus to the train station, and caught the train and I was on route. Jeej.

I walked about the station. Lovely station really. Classically minded, I think maybe Gothic, pardon me aesthetic architecture buffs. But the thing looks oldschool, and not modern, and has a cool vibe, that’s very Euro, and makes me feel on vacation, instantly.

I scope the join, looking for Avtoritet.

You recognize him instantly. Tall. Stylish, he wore a trench. Who the fuck wears a trench, buttoned up, with that belt, these days? But he was tall. I didn’t know that. Not that I care, my old frens are like 6 feet above and shit. Basketball players.

But the eyes are there. Very open, very kind, but piercing and empty and yet intelligent. A bit like me, if I had to describe my own pair of eyes.

We started walking instantly, side by side. Like a House episode. Or West Wing. For the Sorkin fans, out there.

But this is a good sign. They say that in higher corporate spheres, some seniors walks extra fast. Just to see if the junior can keep up. With his pace, with his speed.

AV and me walked the same speed. Foreshadowing or kinship, and mirroring or instant warm connection.

We left the central station, and descended into Brussels. Oh yeah, fuck I forgot to mention I got the number of this cute Belgian girl with red hair. She opened me. Doesn’t happen that often, ever. But I was smoking, and she said in French can I have a light, the BMF I am I spoke french we got to talking, and she was into that Asian scene, and shit, and that K POP shit, and she was weird, I didn’t give a fuck, but she was cute, and I had gotten her number. Even went for a stealth kiss, and we hadn’t even talked for ten minutes. Shit’s fire.

So we head into town, AV and I, chick had to do chick shit.

AV pulled out a pack of cigarettes, started smoking.

My first thought. Huh, he didn’t seem like a smoker. And why would he smoke?

We shared some cigs, and I shared him my Thai bamboo cigarillo I’d picked up from Khao San Road, the party fucked up street of Bangkok. Dangerous, y’all.

We took some pics, for the gram. The pics were boss, and got me a follow from a blue checkmarked infamous dude.

We walked in the sun, and through the Royal Gallery. We scoped the place, and looked at watches, and suits, and hats. Peaky hat. Like Shelby.

We talked about his girl, his first and last love. We talked bizz, and money, and Twitter. It’s always a bit touch and go, at first. But we went to eat something, and I had brought Jack. The food was also on me, and it was steak, and I was bulking then, it was fine.

The restaurant was a fav of his girl’s dad. The thing was ancient. We got a table in dark uncrowded area, up top. The place was fancy looking, but the menus said the food was cheap ish. The decor was wood, and table was wood and it oozed oldschool salon stuff. Like westerns a bit. The wood shone everywhere. Gleaming, a bit.

We ordered. The waiter went away, and we poured Jack in the glasses we had seemingly ordered for the water.

We sipped, and AV was stealthy AF. I’ve drunk with some people, ninja like. And some people are just pussy when it comes to doing shady stuff. AV isn’t.

We took a photo, and this one looked pretty gangster. We were suited up, and we looked like Yakuza and Bratva meeting up.

After, I suggested we get some cigars. I had been a big fan of the Montecristo’s no.5 in Bangkok, which I had purchased in Dubai. They were good, and I knew cigars can bond.

We walked about town, the big main street of Brussels, then made way into a smaller one, the buildings here looked modern, and the window shopping was being done by bustling about people.

The cigar shop was on a corner and we had finally found it, after asking random girls, not gonna lie I was looking for numbers, but AV’s phone finally found the joint.

The cigar shop was empty af, you could hear a pin needle drop. And the guy gave me this damn look. Like people do when a cowboy walks into a watering hole he doesn’t belong. Yet, this time, there were two. One tall Russian MF included.

AV looked at me, and said do your thing.

I walked up to the guy, and said we were beginner cigar smokers, looking for something light, and flavorful, and not too strong.

He gave us our very first Arturo Fuente Maduros, the green and red labels we remember to this day.

We paid, back then we thought it was a lot of money, but now we’ve spend shitton of money on sticks, man.

We walked back to the station, it was getting late, and dark, and I was about to go home. Which didn’t go through, for a reason outside this story.

We sat isolated, near a mini park, under the cover of shade and some lamp posts. A random chinese photographer walked by and we had him made pics of us, smoking Arturo Fuente and drinking Jack.

We chatted, we smoked, and AV didn’t really enjoy those smokes, he had said later. He has a very delicate palate, we believe.

We hadn’t really done much that day, but just did the bonding thing. The Twitter meet. He talked a lot about his girl, which is natural, but later this would change for a spell.

Looking back, knowing AV now more, I didn’t really know what we talked about more, and in depth. But knowing us, the bond we had struck. The kindle that was lit. That was the main thing, I guess.

This story was part of the bigger cover story of July 2020. For the other blogposts go here:

The Avtoritet — A Fury Discourse

This post was an excerpt of Bratva — a Fury story. You can get the full story here now.