“Damn, bro, gotta hit the gym”. Since lockdowns began in 2020, the global situation allowed millions of young men to hold a mirror up to themselves. Throughout the world, there was an irruption of men channeling their energies towards self-improvement. Whether it was to lose a colossal amount of weight, start a profitable business, or both, lockdowns afforded some precious introspection to many. Time spent online, perusing social media during downtime also increased, which translates to more exposure to online topics — such as memes. Over the past two-and-a-half years, there has been a meteoric rise in the volume of self-improvement related memes circulating social media.

Memes have programmed tens of thousands of people out there to take positive action. Memes are the product placement of ideas. Think about how the biggest brands place their products into movies. These brands are always world-renowned, but the goal is to make them as ubiquitous, inseparable to your routine as breathing. Instead of having to splash out the Dollar equivalent of an African country’s annual GDP into marketing, anybody with a decent following can program millions of social media users for free. Various (shitposting) accounts can garner more daily impressions than legacy media social accounts. The way information is consumed has evolved rapidly over the past 100 years. Families spending their evenings glued to the television is something of a relic; these days, the flow of information is more decentralized, making monopolization a little bit harder. Even with rampant censorship at the behest of advertisers or large platforms, uncomfortable truths manage to wriggle through censorship’s safety nets. Attention spans have imploded, which has given rise to the digestible nature of memes to illustrate current affairs with primitive Platonic forms, Jungian archetypes, and succinct messages wrapped in evocative layers of humor. Without having to brazenly state your case, you can make a point by manipulating forms. Brands will have spent hours and boatloads of cash into perfecting their logos, creating sigils embedded into the psyches of consumers. Memes go a step further by (indirectly) using various forms, archetypes, stereotypes, tropes, etc, instead of symbolism. Let’s take a quick glance at a few memes and what they represent. 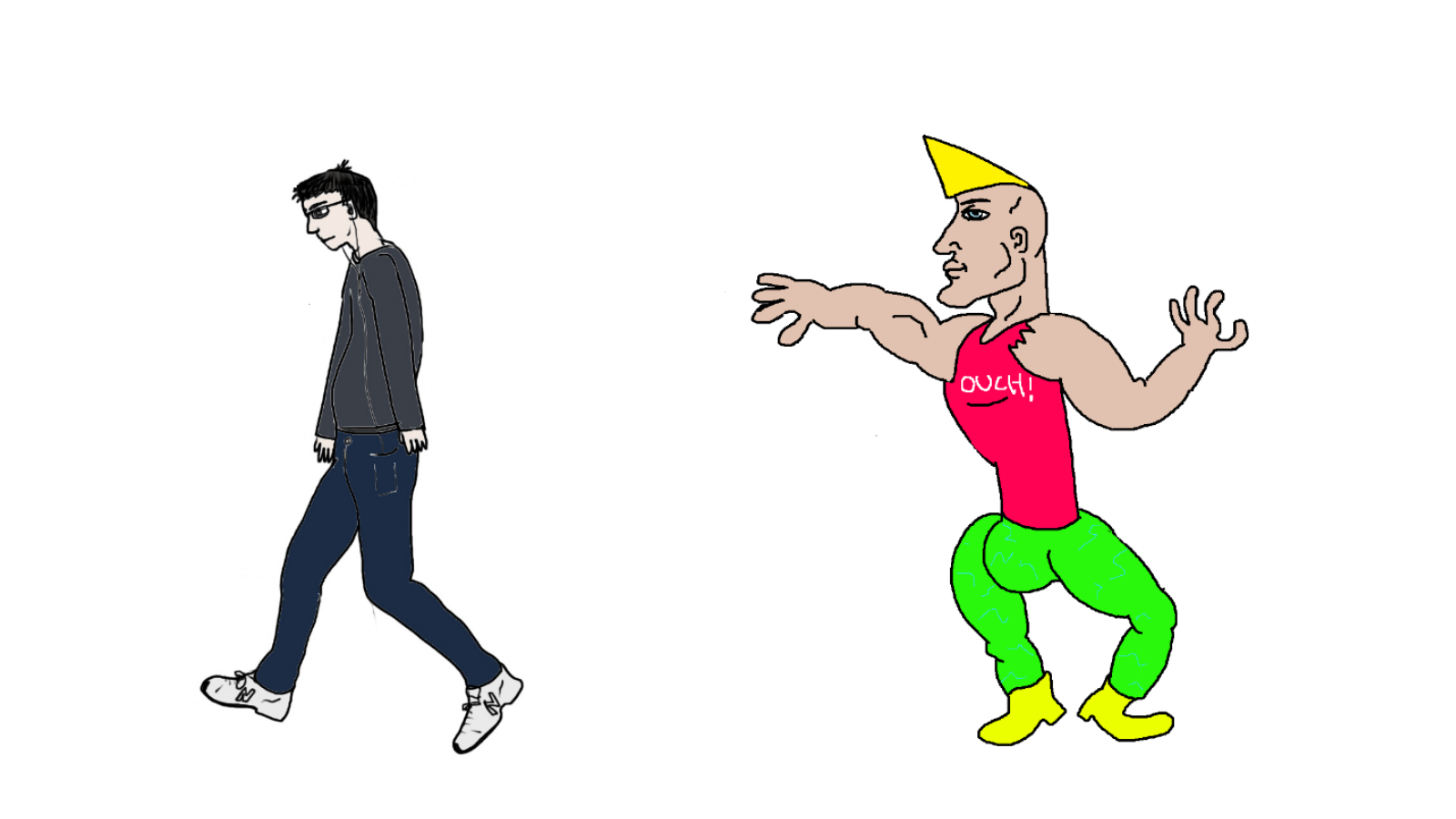 Those who are more Twitter savvy will be aware of the platform’s content over-saturation. With threads, schedulers, and whatnot there are a million and one ways to regurgitate information for engagement. It’s not rocket science — but they do not appeal to the widest possible audience. If you want a stellar reach, you have got to pitch your point in the shortest time possible. You also must consider appealing to the lowest common denominator. Not everyone has an understanding of the intricacies of gut health, how to get girls, or building lucrative sales funnels. Some people just want to be entertained. And what better than a meme to tick all the boxes?

“Depict Your Enemies as a Soyjak.” – Sun Tzu (probably)

Memes are modern day pamphleteering in the age of short attention spans. As society drifts further away from truth, memes will only grow in popularity. Moreover, with the popularity of social media, and the unlimited number of forms, it will become very difficult to censor memes unless there’s an outright ban on images. Effective memes are short. Many YouTubers hook you into their video within the first 8-10 seconds and the thumbnail, as viewers’ attention spans are similar to those of a goldfish, to tap into the algorithm. Memes with too much verbiage or a “wall of text” often fail to garner traction as the viewer’s attention is lost. It’s all about the delivery.

In the meme economy, engagement in the form of likes and shares is the medium of exchange. A laugh, thought-provocation, emotional response is the service offered within a pithy meme. In a post-truth world, you are competing against hundreds of narratives. You may think about narratives as fiat currency — somewhat based in truth but a debased embellishment with myriad expressions according to subcultures, like the Greeks had the Drachma, the Chinese have the Yuan, the Spanish with the Peseta, and the Americans with the Dollar — once upon a time, they were all backed by something. The truth itself is the gold standard, in memes, represented by forms and archetypes. All truth circles back to these forms.

Part of the shift towards a post-truth world comes a post-moral world. This is a world where morality is dictated by the vested interests of the ruling classes. However, it often lacks the aesthetics to match. Even the steeliest supporters of the current establishment recognize aesthetic supremacy in meme forms. Everyone understands that the big Doge is better than little Cheems; the Chad is superior to the Virgin; the Nordic Gamer is right, the Soyjak is wrong. The [correct opinion] is backed by the more aesthetic cartoon figure — handsome, muscular, proportioned, emotionally stable, level headed, calm, upright, articulate, intelligent. The [incorrect opinion] is depicted by a less aesthetic representation — ugly, weak, infirm, emotional incontinent, oversocialized, overeducated, mid-witted,  From an ontological point of view, the [correct opinion] is depicted by the height of being; while the [incorrect opinion] is a lowly form. The juxtaposition of these memes may have indirectly led to certain characteristics becoming unattractive. It doesn’t take a genius to decipher the meaning behind it: big, handsome, muscular, well-groomed, calm — good; small, ugly, weak/out of shape, unkempt, no emotional control — bad. Although the memes have been used to convey ideas outside of self-improvement and across various internet communities, subcultures, and forums, the subconscious messaging remains that there are forms which you might want to avoid. Do you want to be associated with the Chad or the Virgin? I don’t know anyone who wants to be depicted as a Soyjak.

To go over every single meme and what they represent at a subconscious level would be a mammoth endeavor. The overarching theme of this short essay is to expose how the archetypes and forms used within memes can express eternal truths beyond the day-to-day in addition to shepherding people into which aesthetic path they wish to follow. It is undeniable that the Nordic Gamer is a more desirable character than the Soyjak, the Chad over the Virgin, and Doge over Cheems. Although self-improvement may be a touchy subject to some at a time where victimhood arrogates to oneself a considerable amount of power. We all, at some level, understand that victim culture is a charade as our actions favor certain ideals over others.