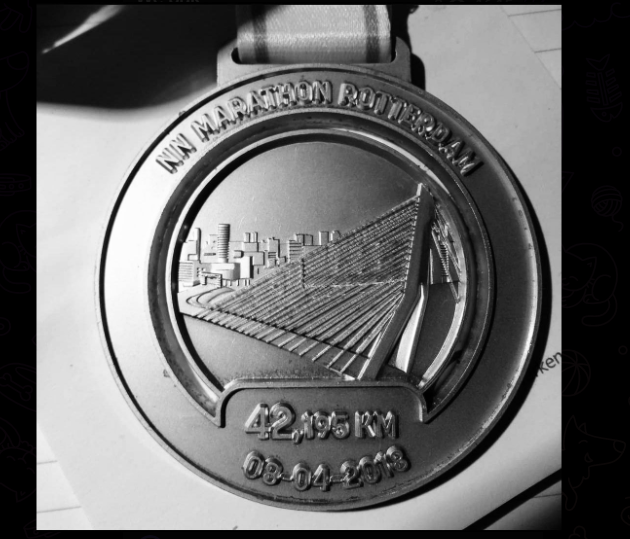 Music in the air. Alvare Soler. Sofia. It’s a Victory Song, even to this day, as soon as I hear it, I know.

Guy on my right is lying on the concrete ground. The main road of my city, closed off for the event. That guy was weak, not gonna lie. Soft. He was almost there. I almost felt sorry for the guy. Not that I wasnt, but I just didnt have the time. Finish time, baby.

I look ahead, no ribbon, to break with my chest or anything. Not a Kenyan who just did it in record time, nor the first to pass. But just a gateway, dont know what’s written on it, dont care, prolly FINISH or smth.

All I cared deeply in that moment, the sun shining, music soaring, me winning.

All I cared about is that I was victorious.

And about to cross the finish line, for the second marathon I ever did.

And not gonna lie, the SECOND I crossed the finish line.

I knew. I thought, This was one of the easiest things I’ve ever done in my life.

2015. I saw a video of GOGGINS, and he talked about testing​ his soul, and mind torture, and taking souls. Lots of new concepts for a younger me, to unrival. I was inspired, a spark kicked up, and I started running.

Before, I’d have troubles getting to the corner of my street, and the first time I ever put on running shoes, my knees started acting up, just a few YARDS in. Genetics, my family said, and says. I believed nonsense then. But I KNOW it’s BS now.

For months I could never break the 4 mile barrier. I know this exact number, cos it’s the distance from here to a gas station in town, and back. I could never beat it.

​One day, something in me snapped. I knew I had potential. I knew I was squandering it. Quite young, then, but I knew my life up to that point wasnt hard enough. I wasnt suffering enough. Not putting in the fucking work. The hate started to boil up, like it does. My energy.

I hit the road, again, maybe failing to break the 4 mile barrier again. But this time I held in the back of my mind.

No, motherfucker, you’re going to run ELEVEN MILES. You are going to MF die on the road, or come crawling back home.

I left my phone at home. And my card which enabled me to travel by public transport. No way back. I was FORCED to complete the mission.

I cracked the 4 mile barrier. Quite easily, in retrospect. But I was starting to get jacked up.

Knees acting up, pain in the joints, and shins.

I started talking to myself, internal dialogue. The most powerful weapon in existence.

The hate and negativity of my whole life started coming up.

There is this place. An intersection of a lot of highway roads, at least near it. I can bring up the weather from that day, exactly, to this day. The sun was shining.

It was warm. I was winning.

I was NOT going to go home, until I finished 11 miles. I had never done it. And jumped from 4 to 11 miles, without adjusting for it. HARD stuff.

I was going to die then and there. Or complete the mission.

The sun shone. And I felt good. Chemicals kicked in, aligning with my vision, and my body was less sore.

I smiled, and knew. I was going to make it.

To this day. That feeling is one of the greatest feelings I’ve ever had. Nothing like it.

At that point, in my own little personal race, I was at maybe 5 miles or less. Not even halfway done.

The week after I completed the 11 mile journey. I knew I had to do it again. Solidify the habit. So the week after, I pulled it off again. I felt good and doubled down, I did it the week after, too. To this day, I don’t run that often anymore, but it’s one of my go to routes. I know the distance by heart.

I started getting cocky, and doing 11 miles on one day, and then attempting to do it the next.

That’s when it happened.

My knee gave up on me. I couldn’t walk for a month. Or more.

I remember that time, I couldn’t stand on one leg, no pressure on it. It hurt like a MF, I thought this was it. That my body had reached its limits, and I could never run again.

It took me months to recover.

I attempted the 11+ miles feat again after that, and I could.

Something in me had snapped. And ever since that incident, my body has become resilient, and very much NOT prone to injuries anymore. It’s will, epigenetics, i don’t know what happened. But after that my body was stronger and I knew I was destined for more.

The first time I ran the marathon, it was not official, and it was on a Saturday, and I hadn’t run in months.

The day is important to me, its symbolic. I pulled a Goggins.

Goggins ran his first ULTRA marathon, on a Saturday. He had googled the ten hardest things to do in life. And the 135 mile San Diego race was the closest thing he could do.

He hadn’t trained, even though he had one of the most powerful minds of this generation and an indomitable body. He just ran 135 miles, with zero training whatsoever and almost died.

When I attempted to run my marathon I traced my favorite route, it’s about 11 miles. A marathon is 26.2 miles. Know it by heart. I knew I had to run my route twice, which is 22 miles, plus a little extra 4 miles, which is from my house to a spot by the harbour.

Only thing was, I had procrastinated on my running. I was lazy, and no mission, and was slacking once again.

I said to myself. I’m going to pull a Goggins. Next Saturday, which was less than a week out, I’m going to run a marathon.

I hadn’t trained in months.

I put on just one piece of garment. Which later turned out not to be enough. It was cold and dark outside.

I had not eaten. Mistake.

The air was different that day. Charged. I was gonna pull of a personal miracle, for myself.

And a brother looked at me. I never forget the look on his face. Why? Because he’s taciturn and doesn’t say much. He didn’t say anything again that day, but his look was in awe and disbelief and doubt. He thought, Nah this guy’s not going to make it.

I didn’t care. But I was going to prove him wrong. I was gonna prove everyone wrong. Fuck all dem doubters.

Few miles in, It fucking starts raining. Soaking my ONE piece of garment I had one. It was a hoodie, a highschool graduation gift. Not a tee, but barely enough, for the wind and rain and cold. It was not storming, but my face was getting wet. More adversity.

I knew, The story was just getting better, and better. If I pulled it off.

To this day, I know, when it rains, I run faster. Rain is like a fuck you by the gods, and me running faster is my personal way of saying fuck you back.

After running half of the Marathon, my vision started blurring, and I could only see yards ahead. It was getting darker. I had finished the halfway point and was at about 13+ miles. But then FUCK, you have to get through the rest of the 13 miles.

All the Goggins techniques came up, and saved my life.

Cos for a fact, I thought I was gonna die.

This would not be the first time in my life, in all honesty.

(lmfaooooo re-reading this piece as of 2022, editing, churning the commas and the periods, sifting out types, I know realized this was PROPHETIC ASF, just lol – since then had at least one more NDE, lol.)

I broke the 13 miles down in little chunks. I told myself, Get to that lamppost. Get to that sign. Cross that street. And before I knew it, through rain, and wind, and cold, I fucking did it.

To this day, it is one of my biggest achievements in life.

I pulled a Goggins.

I got back home.

I looked at the bro. He looked back at me. Saying nothing. Per usual.

Then the look on his face. Writing this, Im fucking smiling.

Mind you. I, ofcourse, did not crack any records running the marathon. It was hardly running. It was more like shuffling. Walking, small sprints of survival, invigoration, and not dying. I had been GONE for SIX FUCKING HOURS. Out in the fucking cold, the fucking dark. The fucking rain.

To this day when some peasant says, “A WHOLE marathon?” I get angry. A marathon has been decided by the fucking GREEKS since the beckoning of ancient times that it is MF 26.2 miles and that guy that died, ran a fucking MARATHON distance to signal the king that they had won. A marathon is a marathon. There is no uhhhh ahaa full marathon. Fuck you.

That look on the bro’s face. It looked like his soul left him.

I took his soul.

The taste of victory of that day has never left me.

I told you this story, as of writing its 2020, because I went out for a walk last week, on the same route I used to ran, and something triggered it.

It started raining, and since its been sunny I hadnt felt the drops on my skin for a long time.

That feeling, coupled with the rain hitting the pavement, releasing petryichor, what they call that pungant vibrant green smell in the air when it rains, unleashed a Proustian floodwave of emotions, and memories, of that day I almost died, when I was in the fucking grip.

Fighting not to die a legend, then and there.

But I lived, and started taking souls ever since.

I suggest you do the same.

[Realizing now that There’s not on record a clear definitive piece on the “Real” Marathon, in 2018 itself. For the Medal, the Gold. Which Cant stay. Titular. With the Voice that I have now I know it will be a very cool read. Itll follow after this one. Thanks for reading, hooa]

How to enter the court if you’re not royalty