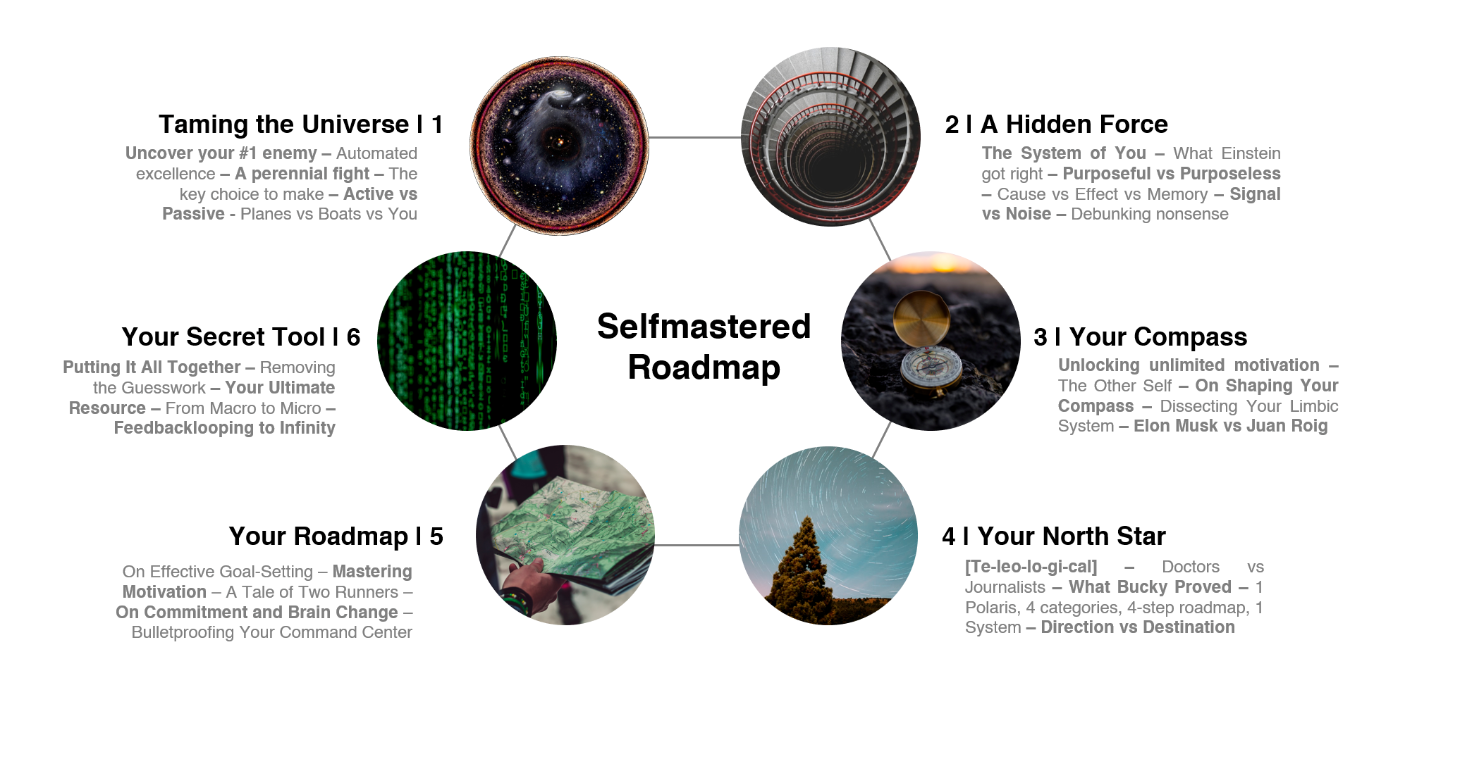 Links may contain affiliates. Meaning if you purchase through them, I get a commission. This cost you nothing extra.

I was talking to Leon. We were talking about one thing.

Then I shifted topics, and said, ‘Have a good gym session.’

Leon said, ‘Wait, what, how did you know? Are you spying on me brother?’

‘Nah. I know you. You once told me what time you go to the gym. Now is that time. You never deviate from your schedule.’

I was talking to Leon.

Leon said, ‘I have a gift for you brother!’

This is not about being a ninja, sneaking up on someone, knowing their schedule. No.

This is not about being Sherlock Holmes, deducing people’s patterns. No.

This is about the Selfmastered Roadmap, I’ve been using for the last two weeks, intensely.

I could’ve waited sharing this, after I’ve used the system for months on end, years even, to show you that it works. The proof would’ve been in my work so to say.

But the thing is…it has been working…my Tweets are more deadly. My Twitter account is growing. I’m fitter. I’m doing better in my relationships, and I’m banking more.

This is not to flex. This is to make you understand this badass system I’m on.

Buckle up. You’re in for a ride.

But first…Let’s talk a bit about the man behind the system Selfmastered Roadmap.

Leon (Twitter handle: @leoncastilloVC) is one of the top performers in Spain. He is a finance expert, a venture capitalist, a startup investor, and mentor. His education lies in architecture, but after graduating found himself in a position where there was not much job opportunity.

So he pivoted, rapidly, and with all his keen and wit, and little moleskines, full of ideas and systems, he put himself on this journey he is now on.

Leon’s fascination for psychology and neuroscience exceeds mine. Which says a lot. Leon went deep down the frikkin rabbit hole, and came out with something beautiful.

His training Selfmastered Roadmap is an amalgam of bleeding edge psychology, a decade of journaling, and experience in the trenches of business. It lies perfectly position at the intersection of the multiple pathways coursing through Leon’s life, up till this moment. A decade later…

Now I started this blogpost with a flashback. It regards time blocking – scheduling your day-to-day tasks by the hours (which made Leon susceptible for ninja strikes – good thing he’s not in special ops…or he would be ganked…).

This time blocking is one of the strong tenets of this system – it enabled me to establish my own personal tweeting ritual. Which made my tweets more deadly.

Second, I am a HEAVY note-taker. I try to measure a lot of things.

“What gets measured, gets mastered.”

Selfmastery is a state.

Moreover, Leon has the DEFINITIVE answer on procrastination. You read a lot about it. I’ve written about it. But I told you I would revisit.

Well according to Leon, paraphrased:

“Procrastination is a symptom. When you procrastinate it’s just a sign you don’t care intimately about the thing you’re doing.”

You’re simply doing shit that doesn’t matter to YOU. DEEP DOWN. In your soul.

I know it, I’ve been there. I’ve been doing shit I don’t wanna, man. For years. Maybe even a decade. The same decade Leon had been using to craft this gorgeous vehicle for peak productivity.

The training has 6 modules, and worksheets to compliment it – and which will be the bread and butter which you will be using for the rest of your life.

The training can be finished in a week.

In a week, your life starts to change.

Remember I started this blogpost with another flashback.

I’ve been on this system for two weeks now. Two.

I’ve been seeing glimpses of flow, and goodness, and peak performance. In all facets of life:

The Four pillars, as I had used earlier in my blogs, and as Leon uses in the system.

I’m fitter than ever. I am quite Zen in my relations, I take things as they come.

I’m BANKING as I sleep – ask my closest friends…they’ll tell you.

–Thing is I was always a fan of Batman.

After Leon gifted me the course, I said, ‘Sometimes I think you’re Batman.’

–Thing is I’ve been waiting for my chance. A long time, man. I’ve been wasting time down the MF drain. Procrastinating. Wasting time on social media. Feeling sorry for myself. OVER comparing with others. Feeling purposeless…soulless…drained.

All that changed with the Selfmastered Roadmap. Boom.

I said, ‘Yeah man, been using your system.’

‘Amazing. I’m so happy that my system was the catalyst for this new and improved Fury.’

Check it out for yourself.